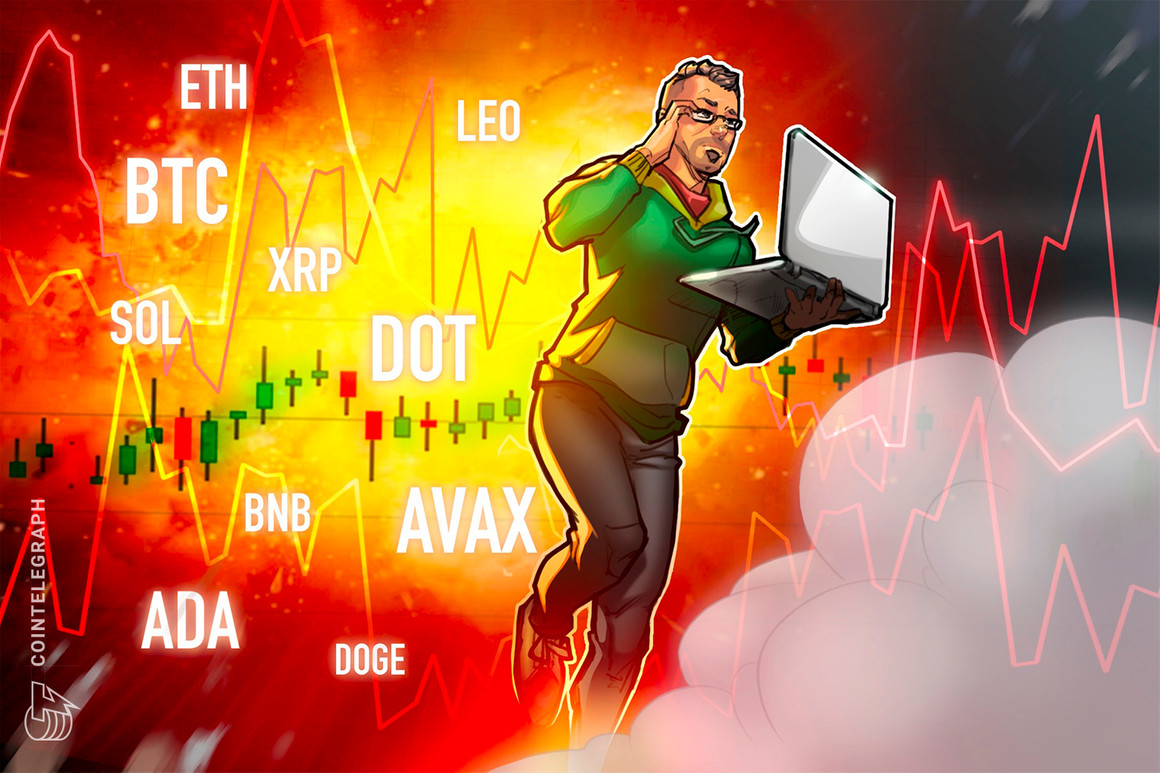 The United States equities markets extended their decline to start the week on June 13. The S&P 500 hit a new year-to-date low and dipped into bear market territory, falling more than 20% from its all-time high made on Jan. 4.

The cryptocurrency markets are tracking the equities markets lower and the selling pressure further intensified due to the rumored liquidity crisis of major lending platform Celsius and traders possibly selling positions to meet margin calls. This pulled the total crypto market capitalization below $1 trillion.

The sharp declines have led some analysts to project extremely bearish targets. While anything is possible in the markets and it is difficult to call a bottom, capitulations usually tend to start a bottoming formation. Traders may get their buy list ready and consider accumulating in phases after the price stops falling.

What are the important levels that may arrest the decline in Bitcoin (BTC) and major altcoins? Let’s study the charts of the top-10 cryptocurrencies to find out.

Bitcoin broke below the immediate support at $28,630 on June 11. This accelerated selling and the bears pulled the price below the critical support at $26,700 on June 12. This indicated the resumption of the downtrend.

The bears maintained their selling pressure on June 13 and sent the BTC/USDT pair tumbling to an intraday low of $22,600. The sharp fall of the past few days has pulled the relative strength index (RSI) into the oversold zone. This suggests that a relief rally or consolidation is likely in the next few days.

Any recovery is likely to face selling in the zone between $26,700 and $28,630. If bears flip this zone into resistance, it will suggest that sentiment remains negative. Traders could then make one more attempt to resume the downtrend. A break below $22,600 could sink the pair to the psychological level at $20,000.

The bulls will have to push and sustain the price above $28,630 to suggest that the bears may be losing their grip.

Ether (ETH) plummeted below the vital support of $1,700 on June 10, indicating that bears are in control. This signaled the start of the next leg of the downtrend.

The selling picked up momentum on June 11 and bears have pulled the price below the strong support at $1,300. This suggests that traders are gripped with fear and are dumping their positions.

The aggressive selling of the past three days has pulled the RSI below 22. Historically, the ETH/USDT pair starts a relief rally when the RSI falls close to 21. This suggests that the pair could attempt a rally to the breakdown level of $1,700.

Alternatively, if bears sustain their selling pressure, the pair could drop to psychological support at $1,000.

The failure of the bulls to push BNB back into the triangle may have attracted strong selling by the bears on June 11. The selling picked up momentum and the price has dropped near the strong support at $211.

If the price rebounds off $211, it will suggest accumulation at lower levels. The buyers will then make an attempt to push the price above the 20-day exponential moving average ($289). If they succeed, it will indicate that the BNB/USDT pair may remain range-bound between $211 and $350 for a few days.

Conversely, if bears sink the price below $211, it will signal the start of the next leg of the downtrend. The psychological level of $200 may offer a minor support but if the level gives way, the next support could be at $186.

Cardano (ADA) broke below the 20-day EMA ($0.56) on June 10 and attempts by the bulls to push the price back above the level on June 11 met with strong selling at higher levels.

The bears have pulled the price to the strong support zone between $0.44 and $0.40. This zone is likely to attract strong buying by the bulls because a break below it could signal the resumption of the downtrend. The ADA/USDT pair could then start its southward journey toward the next major support at $0.30.

Alternatively, if the price rises from the current level, the bulls will attempt to push the pair above the 50-day simple moving average (SMA($0.61). If that happens, the pair may consolidate between $0.74 and $0.40 for a few days.

Ripple (XRP) broke and closed below the support at $0.38 on June 11. This completed a bearish descending triangle pattern, signaling that sellers have the upper hand.

The selling picked up momentum and bears pulled the price below the crucial support at $0.33 on June 13. This indicates the start of the next leg of the downtrend. The short-term bears may book profits near the pattern target of $0.30.

If they do that, the XRP/USDT pair could start a relief rally that may reach the breakdown level of $0.33 and then $0.38. Alternatively, if bears sink the price below $0.30, the pair could drop to the next strong support at $0.24.

Solana (SOL) had been stuck between the 20-day EMA ($40) and $35 for a few days. This uncertainty resolved to the downside on June 11 as bears pulled the price below the support.

This accelerated the selling and the bears pulled the price below the immediate support at $30. The next support on the downside is $22 and later $20.

The sharp selling of the past few days has sent the RSI into the oversold territory. This suggests a relief rally or consolidation is likely in the near term. The bulls will attempt to push the price above the breakdown level of $35 and the 20-day EMA. If they succeed, it will suggest that the current breakdown may have been a bear trap.

Dogecoin’s (DOGE) tight range trading expanded to the downside on June 10. The bears pulled the price below the May 12 intraday low of $0.07 on June 11, indicating the resumption of the downtrend.

The selling further picked up momentum and the bears pulled the DOGE/USDT pair to the psychological support of $0.05. This level could act as a short-term support because the deeply oversold levels on the RSI suggest a relief rally is possible.

Related: How to survive in a bear market? Tips for beginners

The failure of the bulls to push Polkadot (DOT) back into the symmetrical triangle attracted aggressive selling by the bears on June 10. That started a downward move that pulled the price below the critical support of $7.30.

The bulls are attempting to push the price back above the breakdown level of $7.30. If they manage to do that, it will suggest that the break below $7.30 may have been a bear trap. The DOT/USDT pair could then rise to the 20-day EMA ($9.17).

Alternatively, if the price fails to rise above $7.30, it will suggest that the bears have flipped the level into resistance. That could resume the downtrend with the next stop being the psychological level of $5 and then the pattern target of $4.23.

UNUS SED LEO (LEO) has been trading inside a descending channel for the past several weeks. The bears are posing a challenge near $5.60 but are finding it difficult to pull the price below the 20-day EMA ($5.24).

If the price bounces off the current level and rises above $5.60, the LEO/USD pair could gradually move up to the resistance line of the channel. The bears are likely to defend this level aggressively.

If the price turns down from the resistance line, the bears will attempt to sink the pair below the 20-day EMA. If that happens, the pair may gradually dip toward the support line. Such a move will suggest that the pair may extend its stay inside the channel for some more time.

The next trending move could begin after the bulls push the price above the resistance line or bears sink the pair below the support line.

Avalanche’s (AVAX) tight range trading between the 20-day EMA ($24) and the critical support of $21 resolved to the downside on June 11. This indicated the resumption of the downtrend.

The selling picked up momentum and sliced through the support at $18 on June 12. There is a minor support at $15 but if this level breaks down, the AVAX/USDT pair could plummet to the next strong support of $13.

Although the downsloping moving averages indicate advantage to sellers, the oversold levels on the RSI suggest that the selling may have been overdone in the near term. That could result in a relief rally to the breakdown level of $21. The bulls will have to push the price above the 20-day EMA to indicate that the bears may be losing their grip.

Can Solana become the dominant PoS chain despite persistent outages?